Clean Energy Challenges and Opportunities for Investing in Sustainability 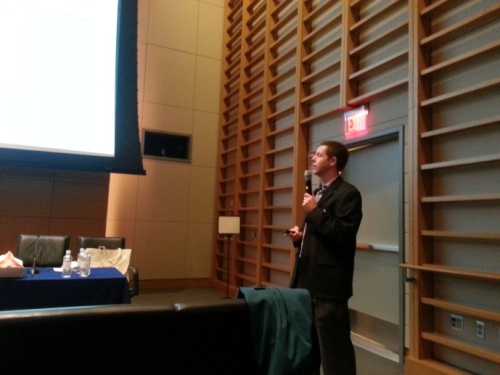 If the Earth had six massive solar installations measuring 200 miles long by 200 miles wide filled with 10% efficient solar cells, it could generate enough energy to meet global demand.  While this is a powerful vision that demonstrates the high potential of solar power, it sounds like a rather absurd thought. Yet this image raises a fundamental question; how can we take better advantage of solar power?

This issue was discussed during the Clean Energy and Sustainability Investing Workshop at the Wharton Social Impact Conference on November 16, 2012, organized by the Wharton Social Impact Initiative.  This year, the theme of the conference was “The Finance of Impact:  Innovative Approaches to Social Change”. The discussion of photovoltaics (PV) emerged as a clear example of how financial investments and technological development can lead to more sustainable change.

We currently have PV technology that can capture solar radiation and turn it into electricity, and many have the desire to utilize this type of energy over fossil fuels. But in the United States, PV currently provides only 0.04% of the net electricity generated.  While the industry has recently been experiencing a renaissance thanks to the declining costs of solar cells, the price per kilowatt is still high and there are concerns with the intermittency and compatibility with the existing grid.  However, this also means that there are many opportunities to make investments that will increase our ability to utilize this renewable energy source.

Penn Professor Andrew Jackson and Professor Jason Baxter of Drexel University outlined the main challenges to various forms of sustainable energy and the particular opportunities for investment in solar cell technologies. Challenges include solving the economic issue of high manufacturing costs, tackling the economic and technological issue of cell efficiency, and the broader opportunity to modernize the nation’s electric grids.

1) Manufacturing technologies: Installing solar panels on a home is cost-prohibitive for many homeowners.  This is because of the high manufacturing costs, which are influenced by the types of materials used and the cost of labor.  An opportunity exists to invest in better manufacturing processes, which would reduce the costs to consumers and lead to an increased use of solar panels.

2) Efficiency of solar cells: Similar to the previous challenge, the efficiency of solar cells is limiting.  However, it is promising that PVs are approaching grid parity in some areas.  Grid parity means that, over their lifetime, electricity produced by PVs will cost the same as power purchased from the grid.  Grid parity has already been reached for rooftop solar in Hawaii and in some areas of California.  As cell efficiency increases, grid parity will be reached in more areas and there will be more financial incentives to make the switch to PV.

3) Modern electric grids: One challenge is the need to convert the electricity generated from solar cells from DC to AC to be compatible with the existing electric grid.  This conversion requires extra installation equipment and costs. Therefore, a significant opportunity exists to invest in upgrading the nation’s old and antiquated electrical grids to new infrastructure that can accommodate renewable energy sources. Smart grids can also increase energy efficiency.  They can, for example, allow users to schedule appliances to run at times when there is lower demand on the electric grid.  Smart grids lead to a reduced energy demand at peak hours and an easier integration for renewable energy sources.

Investments in these areas could help make the use of solar cells more widespread and increase our ability to utilize renewable resources for a greater portion of our energy demands.  This type of investing, often categorized as impact investing, can have a significant and positive impact on society.

*Sharon Muli is enrolled in Penn’s Master of Environmental Studies program with a concentration in Environmental Policy.  She has a background in Biology, is particularly interested in water issues and corporate sustainability, and currently works as a Product Sustainability Co-op at Johnson & Johnson.